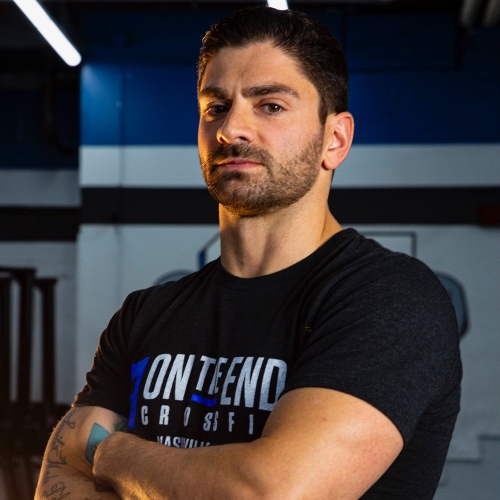 Originally from New Hampshire, Nick spent all my winters snowboarding every weekend. Snowboarding quickly became his favorite thing to do as he would impatiently wait for the winter to come throughout the summers. During the summers however, he had a lot of fun mountain biking, dirt biking, and playing miscellaneous field sports. He didn’t truly find my athleticism or considered himself an “athlete” until he found Crossfit in 2011. He later landed himself a spot on the BRICK Nation Regional Team in 2016. Throughout his time training in the sport, he developed a love and passion for Olympic Weightlifting. That passion was handed down to him by my lifting coach in Los Angeles and quickly became his obsession. While he loves coaching athletes in the strength and technique work that is required to complete the Olympic lifts, he also love strategizing workouts in Crossfit. From his training at a competitive level in the sport, he was forced to and later took passion in finding the most efficient way to win a workout. While there are many ways to achieve a goal, he finds that one way in particular might be the key to edging out your competition; And, he love finding that key. He is passionate about clean and proper movement and full rande of motion ensuring you move well before you move fast. He loves Crossfit and plans to be training in the sport for the rest of my life. He love how it challenges both the mind and body alike. Most importantly, he loves the community that comes with the sport and believes On The End has probably the best community of athletes around. Nick feels very grateful to coach them and be part of their lives and considers many of his closest friend in the gym to be family.

A huge turning point in Nick's life was when his sisters passed away. He was living in Los Angeles at the time but shortly after their passing, he moved back home to New Hampshire to be close to my family. He found himself depressed and grieving and tried to numb those feelings with alcohol. Drinking was not the way to grieve a loss. It wasn't long before my stepmother came to his room, telling him enough was enough and he needed to move again. She helped him find a job and shortly after, he found Crossfit with which he quickly became obsessed - eating strict paleo, sometimes even working out twice a day and watching all the Crossfit content he could find. While he feels he may never fully understand why his sisters were taken from him and his family, he believes their passing gave him perspective, a certain level of inner strength, and the courage to face what seemed like impossible scenarios. He no longer sweats the small things. Events or problems that may have been a big deal to him in the past no longer seem as important. He values family and good friends the most and through all of it he has learned that life is short. You don't know how long you have, so live your life as best as you can. Keep your good friends and family close and try to go to bed each night proud of what you accomplished. Day by Day. Action by Action.

Nick believes you can be the most educated person in the room but if you can't talk to people, on their level, your knowledge of the matter doesn't make a difference. He excels at coaching through relating to who he's talking to. The fear that many athletes might have to get the barbell over their heads is the same fear he's experienced. The Olympic lifts are probably some of the most technical movements we do in the gym and nothing gives him more pleasure and gratification than seeing one of his athletes finally getting better mobility in an end range of a snatch or clean or when they PR their most challenging lift. Nick is genuinely proud to coach each one of my athletes and their success is as important to him as his own. No matter the goal or accomplishment - big or small - he finds true satisfaction when athletes leave his class feeling proud of what they accomplished that day.